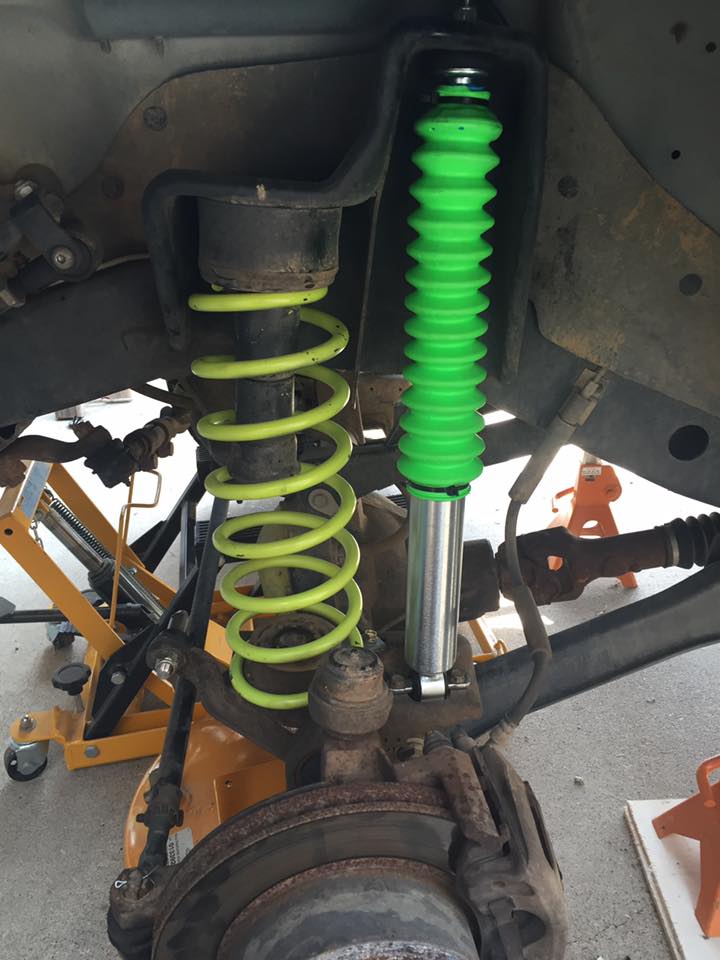 Putting out this alert for all my friends – From now on if anyone sees me in an auto parts store, handcuff me and take me to a professional mechanic.

Blew the shocks on the Jeep (again), I probably should quit jumping the creek to get away from Roscoe…  So anyway, resulted in another DIY day in the 100+ degree Texas heat. I had figured that the added lift and 500+lbs of bumper, armor, & winch to the nose of the ZombieWrangler probably was putting excess load on the factory coils making shocks work too hard.  So with my nearly $200 shock purchase, cool guy at the Jeep parts store gave me a set of pull off coils from a bigger Jeep that are “a little stiffer” .  Who turns down free? After a de-greaser bath and several coats of ZombieWrangler signature puke green I was ready to climb this mountain.

I did it smart this time, got out the QuickShade, big fan, stool, tool/part table, and of course the air ratchet and impact wrench.  It’s only 8 bolts per side, and the tire was 5 of them, this should be easy.  But “Naaaay” said the jeep gods.

Got first side done in just over 3 hours, with no catastrophes, even manufactured a spring clip that was MIA. Still rocking along.  Then the downward spiral started.  On the passenger side I had to take apart the air box to get to the shock bolt, and then spring compressors didn’t’ fit as well on this side because of steering bracket on axle, about 1/4 of the way in one clamp popped loose <scary>.  FYI Spring compressors are the scariest tool I have ever worked with, that much potential energy being held by a 1/2″ clip, I smelled my death several times this weekend. 😦

Then I could not get the new “stiffer” spring compressed enough to fit around steering linkage, so I decided to take off the bump stop post, and consequently broke off the bump stop bolt, then I knocked my box of screwdrivers off the shelf, which knocked off 2 other shoebox-sized tubs of random hardware, then I threw something and decided it was time to quit before more violence ensued.

So Jeep still up on jackstands, new rubber bumpstops on order, soaking the bolt Liquid Wrench. Will try bolt removal tonight and might have Jeep back on road by Wednesday. 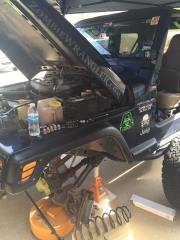 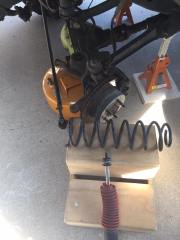